Over time an engine (in particular diesel engines) can be become clogged up with carbon deposits.

This is most commonly found within the Intake Manifold, Throttle Body and EGR Valve. Large amounts of hard carbon matter accumulate over time and start to block the natural flow of exhaust gases. This results in poor starting, loss of power, poor economy, and eventual catastrophic damage within the engine.

What causes carbon build up? 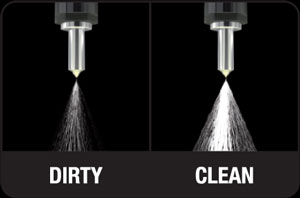 A simple way to explain how carbon is formed, is by the combustion process of fuel (petrol or diesel) which creates exhaust gases (soot). An engine requires oil to lubricate all moving parts and prevent friction and as a consequence comes into contact with these exhaust gases. The resultant by-product is a black sticky material that attaches itself to the internals of the engine - cylinder walls, piston heads, valves (intake and exhaust), injectors, EGR valve, and eventually DPFs.

Because an engine operates at very high temperatures this resultant sticky by-product becomes hardened and very difficult to remove. The use of in-tank additives can assist in the reduction of carbon build-up but does not prevent the process from happening!

Modern oils and fuels now have additives added to them to reduce carbon build-up and prevent unnecessary premature engine wear.

Our specialist TUNAP Automotive Chemistry process helps to prevent the future build-up of unwanted carbon. Regular applications of intank additives and a full JLM Extreme Intake Clean is highly recommended when servicing a vehicle. After all your vehicle is one of the most expensive purchases you will make in your life, so it makes sense to look after it.

Here are some examples of carbon build-up, with before and after cleaning results! This can be caused by poor fuel quality, over fuelling, which will often result in poor running symptoms, poor economy, reduced performance and surging at high and low revs.

Occasionally, injectors can suffer from cavitation which is caused by very minute abrasive particles in the fuel.

This abrasive creates a small cavity in the body of an injector and will eventually cause catastrophic failure.

Performance, Economy and Power. Your vehicle is safe in our hands.

Deposit Payment Prior to Booking.